Home Sports Would New Orleans Pelicans do this blockbuster trade for OG Anunoby? 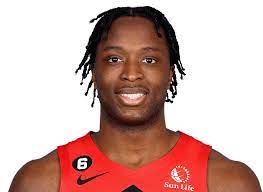 Would New Orleans Pelicans do this blockbuster trade for OG Anunoby?

darudemagDec 21, 2022SportsComments Off on Would New Orleans Pelicans do this blockbuster trade for OG Anunoby?

It’s the nature of social media where fans and pundits tend to overreact to every win and loss. Personally, I don’t think the Pelicans have any reason to panic, as they’ll be back to full strength soon and just went through a brutal part of the schedule.

But these recent losses have exposed some weaknesses, namely that the Pels’ vaunted depth doesn’t look so deep if Brandon Ingram isn’t in there.

There have also been rumblings about whether Jonas Valanciunas is a good fit (though he quieted some of that with his 37/18/5 night against the Bucks) and whether Herbert Jones’ regression from 3-point range is a problem.

This will all pass as soon as the New Orleans Pelicans start winning again, but there are definitely arguments that this roster could use some tweaking.

The Pelicans are one of the few teams in the NBA who have the young players, contracts and picks to go out and get a star, so should they?

There has been speculation that the Toronto Raptors will eventually move forward OG Anunoby to reload around Pascal Siakam and Scottie Barnes. The price won’t be cheap, and Zach Lowe recently speculated that OG might fetch nearly as much as Donovan Mitchell did for the Jazz.

This led Pelicans’ writer Mason Ginsberg to come up with this blockbuster three-team trade that would bring Anunoby (among others) to New Orleans:

should start by saying that I don’t think the New Orleans Pelicans need to make a trade to compete for a title this season, but this one is intriguing.

There’s a lot to sift through here, but I am going to ignore the other two teams in the deal and focus on why the Pelicans wouldn’t (or would?) do a deal like this. (Courtesy of pelicandebrief.com | Writer: Aaron Kellerstrass)