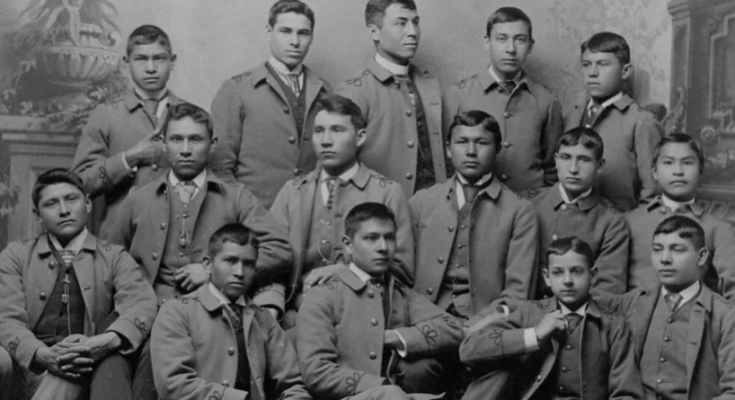 darudemagAug 23, 2021UncategorizedComments Off on U.S. and Canada’s Indigenous Cultural Genocide

The U.S. and Canada are starting to face their history of forcing indigenous children into abusive boarding schools. Here’s everything you need to know:

What was the school’s goal?

Simply put, cultural genocide. In the 19th and 20th centuries, the U.S. government and religious leaders used compulsory boarding schools to force young Native Americans to give up the languages and cultures of their ancestors, which were considered self-evidently inferior to a Christian, Western-style upbringing. Boarding schools were made mandatory for Native American children in 1891. This often meant forced separation from their families and communities. And because these schools were underfunded, crowded, and often unsanitary, thousands of students died of disease. Canada also coerced at least 150,000 indigenous children into a network of residential schools that were mostly run by the Catholic Church; last June, researchers uncovered 1,148 unmarked graves on the grounds of three schools. U.S. Interior Secretary Deb Haaland, a member of the Laguna Pueblo people whose maternal grandparents were forced to board, has opened an investigation into America’s boarding-school policy. “This attempt to wipe out Native identity, language, and culture,” she wrote in a June Washington Post article, has “never been appropriately addressed.”

Who ran boarding schools in the U.S.?

Of the 367 boarding schools for Native Americans known to have operated in the U.S., the federal government operated more than half, the Catholic Church about 100, and many others were run by various Protestant denominations. In 1879, the first off-reservation government school was founded by Richard Henry Pratt, an Army general who had overseen the education of Native American prisoners of war. The first 86 students recruited for the Carlisle Indian School in Carlisle, Pennsylvania, were Lakota Sioux. Pratt convinced Lakota leaders that education was critical to their people’s survival, but later wrote that he had planned to make the children “hostages for the good behavior of their people.” Pratt rejected then-popular notions of white biological superiority, but he said his mission for each student was to “kill the Indian in him, and save the man.”

They were essentially treated like prisoners. On arrival at the school, the long hair of both boys and girls — which had deep spiritual significance for many indigenous peoples — was typically shorn. Children were compelled to discard their traditional clothes and take English names. In later years, new students were doused with DDT. They were forbidden from speaking their own languages, and the ban was often enforced with corporal punishment. At both government- and church-run schools, physical and sexual abuse were rife. Students were expected to perform daily manual labor, and instead of being allowed home, students were often sent on summer “outings” to local white families, where they worked as farmhands or domestic servants for little or no pay. Because of limited indoor plumbing in dorms and poor ventilation, infectious diseases such as tuberculosis, the flu, and smallpox spread quickly. A student at Carlisle, Luther Standing Bear, recalled nearly half of his fellow Lakota classmates dying. At some institutions, students were expected to make coffins for their classmates in school woodshops.

Was there any resistance?

Escapes were so common that some schools offered bounties for the return of runaways. Many parents also resisted sending their children away, though the federal Bureau of Indian Affairs could withhold food from those who refused to comply. In 1894, the Hopi residents in what is now Arizona fought against armed soldiers in an effort to keep their children at home. “Our children were taken by force,” one Hopi leader later recalled. “They were dragged from the fields and from the rocks and from their homes, and if they hid away, they were shot at.” Eventually, 19 Hopi men were arrested and sent to Alcatraz.

When did the schools close?

In the 1960s and ’70s, the Pan-Indian Movement demanded the right to a self-determined education; finally, in 1978, the Indian Child Welfare Act abolished compulsory boarding-school education. Most of the remaining boarding schools closed soon after, but 15 schools are still taking boarders, with modified educational goals.

How is this history being addressed?

Haaland has requested that the Department of the Interior make a final report next April. Last month, the Sicangu Lakota of South Dakota successfully brought home the remains of nine children and teenagers who died at Carlisle. In 2008, the Jesuits paid $5 million to 16 people who said they were sexually abused by clergy at a Washington state boarding school. So far, the Vatican has not issued a formal apology for the church’s mistreatment of indigenous children in Catholic boarding schools. The United States government also has not issued a specific apology for forced boarding: A 2020 congressional bill that would have created a truth-and-reconciliation commission died in committee. Native American survivors and activists say that the work to reckon with this chapter of American history is just beginning. “This isn’t some kind of isolated history chapter,” said University of Iowa historian Jacki Thompson Rand, a member of the Choctaw Nation. “We’re all still paying for it.”

The scars of family separation

When they graduated, boarding-school students often found themselves alienated from their people, unable to speak their language, and lacking important life skills. Traumatized and shamed, many sank into poverty and substance abuse, which damaged their ability to raise their own children; indigenous people who were once separated from their parents frequently had their kids become wards of the state. Before the Indian Child Welfare Act, according to a report by the Association on American Indian Affairs, more than a quarter of Native American children nationwide had been taken from their parents for the children’s safety, often to be placed in non-Native households. In states such as Minnesota, South Dakota, and Montana, indigenous children are still disproportionately represented in the foster-care system. “You have all of these people who were put through extreme abuse and neglect,” said Sioux writer and former tribal judge Ruth Hopkins. “You have people who didn’t really learn how to parent correctly.” (Repost Courtesy of The Week Magazine)