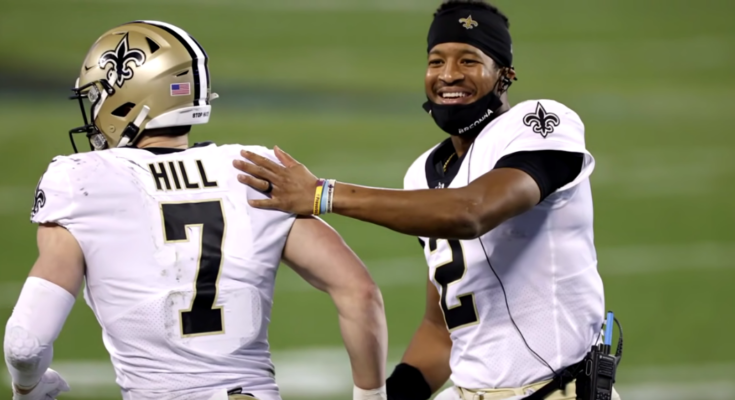 Who knew we’d be seeing a playoff game in August on Monday Night Football?

The New Orleans Saints‘ quarterback competition is still, unofficially, too close to call heading into their second preseason game against the Jacksonville Jaguars.

Before you craft your social media response about how that proves Jameis Winston and Taysom Hill aren’t good enough and the Saints are doomed without Drew Brees, it simply means the team wants to give both guys a fair and full evaluation.

Winston will get the start Monday after Hill started last week’s preseason opener.

“We’re evaluating it all, and we have another opportunity to play Monday night,” said Saints coach Sean Payton, who said there is “a lot” the team can still learn. “Moving the team, decisions, protecting the football — all the things that go into winning at that position.”

If we were scoring this thing like a boxing fight, Winston would probably be ahead on most scorecards. He has reached higher highs throughout camp, including the two touchdown drives he led last week at Baltimore and a handful of deep balls he has hit in practice. His 80-yard TD to Chris Hogan during Friday night’s practice in the Superdome might have been his prettiest yet — hitting the receiver in stride more than 50 yards down the field.

But neither QB has delivered a knockout blow — which raises the stakes for the second and third preseason games.

Hill, who turned 31 on Monday, also had one of his better practices Friday by showing some good decisions on his second or third reads — including two TD runs in a red zone drill. Hill’s running ability is the great equalizer in this battle, and it’s admittedly something he hasn’t displayed much in practice since he said he would rather use those sessions to work through his progressions.

“I feel really comfortable,” Hill said. “I feel capable of doing all those things that you need to do in this league to play quarterback. And then there’s this whole element that I’m capable of doing on Sundays that you don’t really get to showcase in a practice setting, as well.” (Continue Reading ESPN)