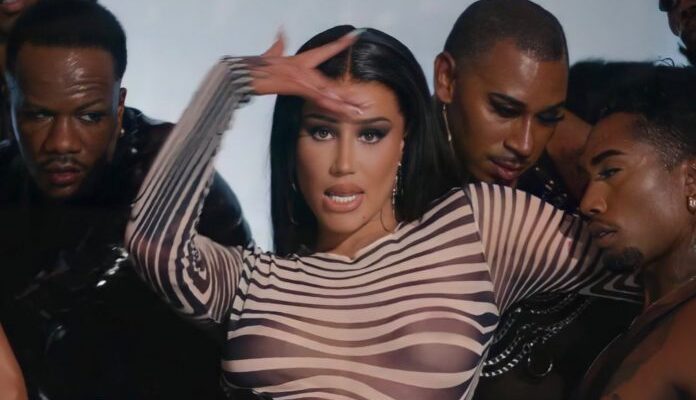 In her latest video, Iggy Azalea’s fans noticed that the Australian-born rapper’s appearance looked different. Social media began to call her out for “blackfishing” when they noticed that her skin tone was a few shades darker than she is.

The term blackfishing was coined by hip-hop journalist, Wanna Thompson and she defines it as “the phenomenon of non-Black influencers and public figures using bronzer, tanning, Photoshop, or even cosmetic surgery to change their looks to appear Black or mixed race.”

Thompson also added, “The word stems from the racist practice of blackface which involves putting on dark makeup to mock the features of a Black person, often for comedic effect. Like blackface, blackfishing also treats Black features as a costume that can be removed at will.”  (Hot97)

Racist culture vultures like Iggy Azalea rape our music and use it as a way to promote images harmful to us.
Her new song is, “I am the Strip club,” but she shows herself fully clothed and has black men dressed up like whores.
That’s the message: I’m pimping you black people. pic.twitter.com/1e0jrZN4Cy

Is she blackface or am I seeing things wrong?

You are telling me that THIS is Iggy Azalea? When will the blackfishing cease? When. https://t.co/kt2eXtPJSB

Can someone please tell #IggyAzalea that she’s not a person of color ?? Stop Blackfishing it’s very discriminatory abd vulgar especially in this BLM era !!! # pic.twitter.com/yS8xFc5Yif

I didn’t recognize Iggy Azalea from these photos. She got rid of the blonde hair and has a spray tan darker than Amber Rose. She is hardcore blackfishing and trolling with the look and the song. Lol. She hid her Black baby for a year too. pic.twitter.com/Swrq3kZ0ns