Like
Short interest in Aurora Cannabis rose significantly in the last reporting cycle and reached its all-time high.

The company is facing bottlenecks in its supply chain which may limit its growth and/or force its management’s hand to dial back on their capacity expansion plans.

This may not be a bottom for the stock just yet.

Shares of Aurora Cannabis (ACB) are down by almost 70% over the past 7 months alone, driven by a myriad of issues, but a bottom may still not be in sight. Latest data reveals that short interest in the scrip has climbed to its all-time highs. This buildup of short positions means Aurora’s stock could remain distressed over the coming weeks, unless the company comes out with a surprise positive announcement and squeezes the shorts. But things, as they stand, do not encourage long-side investments in Aurora at the current levels.

Short interest is basically the total number of short positions that are open and are yet to be covered. A sharp decline in the metric indicates that a broad swath of market participants closed their short positions in a particular stock. Conversely, a sharp rise in the metric means market participants are stacking short positions in the scrip perhaps because they feel the security is overvalued and is due for correction. So, the short interest metric is essentially a tool to gauge market sentiment pertaining to stocks listed on US bourses.

Coming back to Aurora Cannabis, its short interest rose to its all-time high of 153.03 million shares in the last reporting cycle (per Ycharts). This suggests market participants aren’t too confident about Aurora’s growth prospects. Actually, on the contrary, they’re feeling confident its shares will continue to decline in value going forward. I had warned investors in a previous article back in August that its short interest may pile up.

Here’s the interesting part – since I wrote that report, shorting activity in Aurora Cannabis has risen by about 40% while its shares have declined by almost 40%. This is generally counterintuitive. A sharp decline in the stock price gives short-side traders and speculators to close their positions and book profits. But that obviously hasn’t happened in this case.

We’re seeing a buildup of short interest in spite of its shares crashing almost every week. This suggests that short-side market participants aren’t closing their positions and booking profits. Rather they seem to be growing more aggressive with their short bets, likely because they expect the downtrend to continue in full momentum going forward as well. This doesn’t inspire confidence for long-side investors at least.

But that’s not all. I did a peer comparison to put things in perspective. 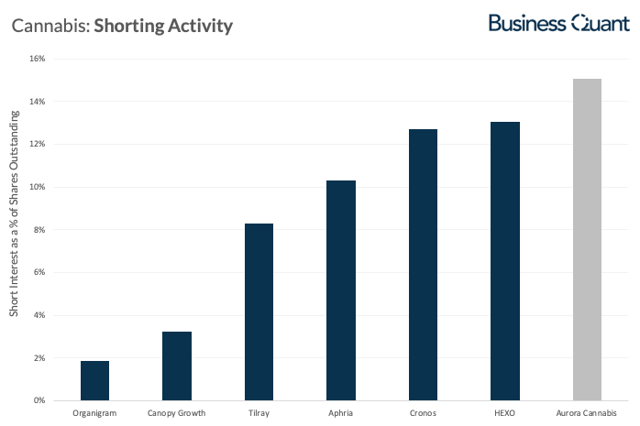 Apparently, Aurora Cannabis is currently one of the most heavily shorted names in the Cannabis space, compared to some of its prominent peers. This means that short-side market participants are specifically targeting Aurora Cannabis. If growth prospects for the mentioned names were fundamentally flawed, then we’d have seen their short interest as a percentage of overall shares outstanding figure, to be comparable if not higher. But clearly, shorts seem to be specifically circling around Aurora Cannabis of late.

But now the key question – Why is the market growing bearish on Aurora Cannabis?

Anyone closely following Aurora Cannabis would know that the company has an aggressive capacity expansion plan underway so it’s able to meet future demand in a big way. The company had several facilities with about 195,000 kilograms in collective annualized production capacity at the end of Q4, and its management is planning to add another 350,000 kilograms by next year. This, no doubt, can result in blockbuster growth for Aurora if the demand is strong. The keyword here, though, is “If.”

Per our database, Aurora’s kilograms of Cannabis produced have far exceeded the kilograms sold. One might argue that the company is building up inventory and bringing more production facilities online well in advance. But the issue is that the demand doesn’t seem to be as strong as previously anticipated, or maybe it’s just bottlenecked for now. 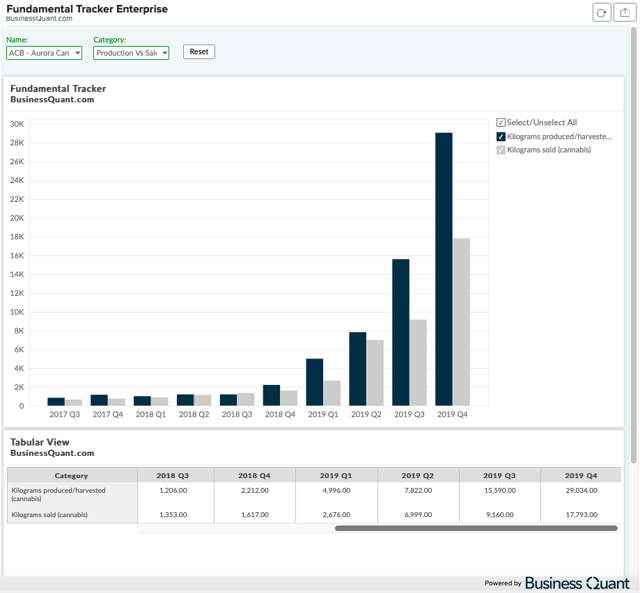 I say this because of three reasons. First, Aurora Cannabis missed its Q4 revenue guidance by a significant 4.4%. While it did register healthy year-on-year revenue growth, a revenue miss of this magnitude goes to suggest that perhaps the demand story isn’t as robust as the management may have previously forecasted.

Secondly, while its management downplayed the revenue miss during its Q4 earnings call and said that the revenue miss happened in the non-Cannabis or ancillary business verticals, they also acknowledged retail stores were a bottleneck in the supply chain that was limiting their growth:

While retail distribution in key provinces has been a constraint in fiscal 2019, we will see retail infrastructure expand in 2020 through the launch of new brick-and-mortar stores across Canada.

Management of another prominent Cannabis firm, The Green Organic Dutchman (TGOD), actually issued a press release last week, discussing their restructuring plan. They stated in the press release that the Canadian market is much smaller than they previously anticipated:

With the current Canadian legal market being smaller than initially anticipated, mainly due to a slow rollout of retail locations in key provinces, we believe that our revised plan will allow TGOD to right size its production to capture the organic segment, while maintaining optionality to quickly accelerate and expand as more retail locations begin to open.

This puts a question mark on whether Aurora Cannabis is moving in the right direction with its aggressive capacity expansion plan. Producing too much too quickly, while the demand-side is bottlenecked, may result in the company sitting on unsold inventory and it might as well force the management to deep discount their product in a bid to keep their inventory rolling. This can bring along margin compression or inventory write downs in the future.

There was earlier the narrative that Aurora Cannabis would divert excess produce to international markets and tap more lucrative growth opportunities. But it became clear that international route isn’t a savior for the company just yet, in its Q4 earnings report, when its European revenue figure accounted for just $4.5 million after so much hype. 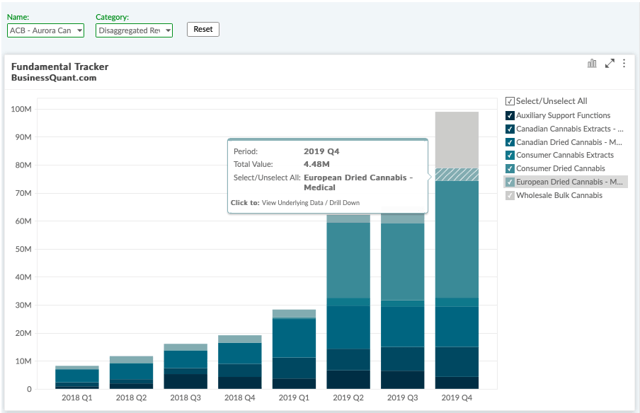 Another way out of this tricky situation is for Aurora’s management to dial back on their aggressive capacity expansion plan till bottlenecks in supply chain ease. But I think it’s needless to say, neither of the above-mentioned scenarios paint an encouraging picture for long-side investments. All three scenarios can potentially result in Aurora’s shares tanking due to a backlash from investors. So, the build-up in its short interest is probably justified.

So, what can you do?

Well, I continue to believe that Aurora Cannabis is en-route to becoming a prominent Cannabis brand in several international markets. Its management is taking bold decisions to ensure they’re able to tap future demand in and across borders. But its journey won’t be linear and may involve occasional speed bumps.

Long-term investors with a multi-year time horizon may want to take advantage of these speed bumps and accumulate the cannabis manufacturer’s shares if they decline by another 15-20%. Risk-averse investors, however, may want to avoid the scrip altogether or remain on the sidelines for now as Aurora Cannabis may not have bottomed out yet. Good Luck!

Author’s Note: I’ll be writing another report on Aurora Cannabis next week, you can stay updated by clicking the “Follow” button at the top of this page. Thanks!

Disclosure: I/we have no positions in any stocks mentioned, and no plans to initiate any positions within the next 72 hours. I wrote this article myself, and it expresses my own opinions. I am not receiving compensation for it (other than from Seeking Alpha). I have no business relationship with any company whose stock is mentioned in this article. (Business Quant)

Previous PostPower Recap: Ghost Finds Himself in a Two-Front War Next PostDonald Trump compares his Impeachment Inquiry to a "Lynching"