darudemagAug 23, 2021A LifestyleComments Off on Jean-Michel Basquiat used in Tiffany’s New Campaign

Beyoncé and Jay-Z, together for the first time in an ad campaign for Tiffany & Co., it’s fair to say there is a third star in the spots: a never-before-seen painting by Jean-Michel Basquiat in the jeweler’s signature robin egg blue.

Tiffany recently acquired the spectacular artwork, which had been in the possession of a private collector since the early 1980s, adding another surprise and layer of storytelling to a vast, yet nuanced advertising effort, which is to break in print next month. 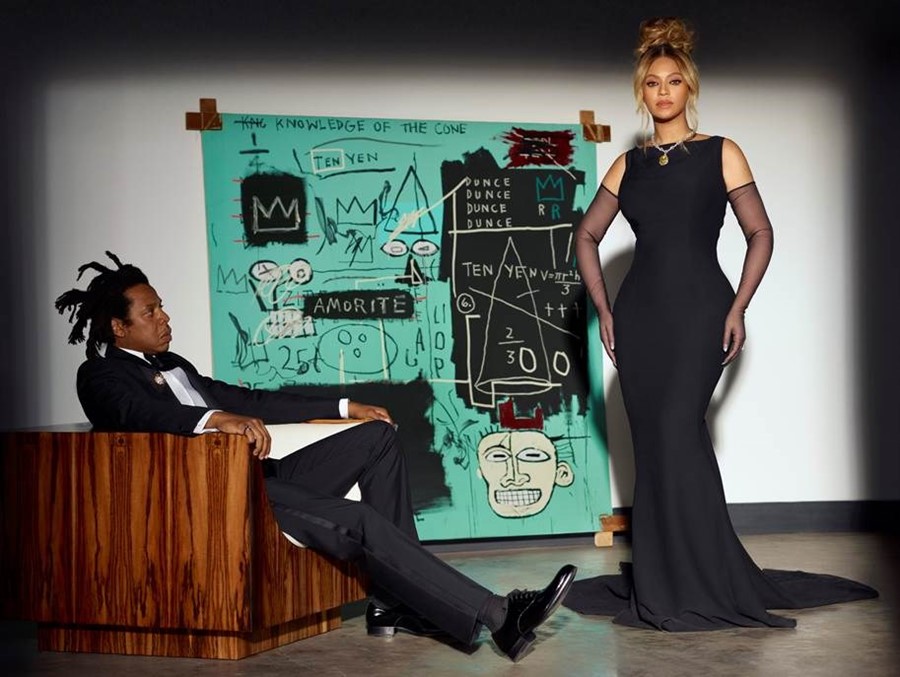 Now controlled by LVMH Moët Hennessy Louis Vuitton, Tiffany is putting major firepower behind the yearlong campaign featuring the Carters, which includes a short film that depicts Beyoncé singing “Moon River” to her husband. It’s destined for major exposure in the coming months, including a takeover of all the digital billboards in New York’s Times Square.

Unveiling the first campaign image exclusively to WWD, Alexandre Arnault, Tiffany’s executive vice president of products and communications, also told the back story of the project in his first sit-down interview since joining the historic New York jeweler last January.

The ads mark the first time the two music superstars will appear together in a campaign and the first time the famous Tiffany Diamond — with its 128.54 carats and 82 facets — will feature in one. Only three other women — Mary Whitehouse, Audrey Hepburn and Lady Gaga — have ever worn the famous gemstone, which was unearthed in South Africa in 1877.

It’s also tantamount to a record release, with Beyoncé debuting her own interpretation and arrangement of the famous song from the 1961 movie “Breakfast at Tiffany’s” as Jay-Z filmed her with a Super 8 camera. For the film, or call it a music video, she conscripted director Emmanuel Adjei, the co-director and creative collaborator of Beyoncé’s acclaimed musical film “Black Is King.”

Meanwhile, the Basquiat painting, dating from 1982 and titled “Equals Pi,” ties a neat ribbon around a spectacular talent package, being a legendary New York artist that the Carters also admire, relate to — and collect.

“We don’t have any literature that says he made the painting for Tiffany,” Arnault related over Zoom. “But we know a little bit about Basquiat. We know his family. We did an exhibition of his work at the Louis Vuitton Foundation a few years back. We know he loved New York, and that he loved luxury and he loved jewelry. My guess is that the [blue painting] is not by chance. The color is so specific that it has to be some kind of homage.

“As you can see, there is zero Tiffany blue in the campaign other than the painting,” he added, noting that the artwork will ultimately take up permanent residence in Tiffany’s flagship boutique on New York City’s Fifth Avenue, currently undergoing renovation. “It’s a way to modernize Tiffany blue.” (Continue Reading)