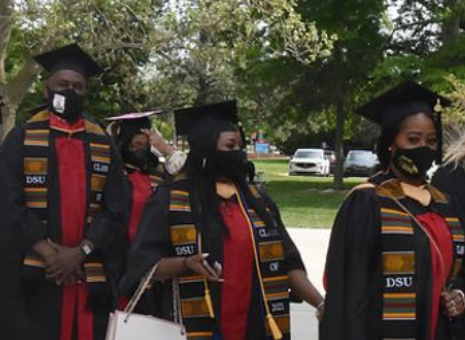 Historically Black colleges and universities are using an influx of Covid relief cash to forgive student balances while recovering from the pandemic.

At least 20 HBCUs have cleared student account balances for the majority of the 2020-2021 academic school year after seeing a 5% drop in enrollment during the pandemic, straining systems already facing historic financial crunches. Administrators said the moves are essential to aid students through the pandemic because graduates of historically Black colleges typically carry more student loans than those who graduate from predominantly White schools.

“We’re aware that the number one reason students don’t return to college, as a whole, is lack of funds—especially at HBCUs,” said Glenda Glover, president of Tennessee State University, which announced Aug. 4 it would clear balances of returning students who were enrolled from spring 2020 to summer 2021.

“At TSU, we have students who are first generation students and Pell [grant] eligible students, so finding funds can be very stressful. We want them to focus on studying and graduating, rather than where they’re going to get the money to do that.”

Many of the HBCUs, including TSU, used funds from the Higher Education Emergency Relief Fund under the Coronavirus Aid, Relief, and Economic Security (CARES) Act, joining other colleges that have erased students’ unpaid balances by using stimulus money during the pandemic. Langston University, Oklahoma’s only HBCU, announced Aug. 6 that it canceled the student account balances during any “pandemic semester.”

Clearing those balances will provide financial relief to many students but won’t affect the debt they owe on student loans, of which the vast majority are disbursed by the federal government.

Biden has canceled $1.5 billion in student loans for specific categories of borrowers, such as those who are disabled, but the administration has balked at making debt forgiveness more widespread.

Nearly three-quarters of Black students typically graduate or leave their institutions with Title IV federal student loan debt, compared to 55% of White students, according to a report from the Roosevelt Institute.

“We’ve been neglected over a period of time by federal and state governments,” said Alabama State University President Quinton Ross.

“While I’m grateful for what we’ve seen from lawmakers since 2020, we’re all just watching to see a full-time commitment because HBCUs have always been low-hanging fruit. It’s a good start, but we’re still watching.”

The Biden administration last week extended a pause on federal student loan payments until Feb. 1. But top lawmakers, including Senate Majority Leader Chuck Schumer, have urged the White House to go further and cancel as much as $50,000 of debt per borrower. Biden has said he doubts the government has the authority to cancel that much debt.

Most of the fee forgiveness for HBCU students will apply to those enrolled or graduating during pandemic semesters, meaning from spring 2020 until fall 2021.

Wilberforce University, an Ohio HBCU, canceled over $375,000 of student debt from 2020 and 2021 under the Cares Act and with outside funding. Florida Agricultural and Mechanical University (FAMU) announced in July that it spent over $16 million to cover students’ fees, tuition, and unpaid account balances.

The extra federal money is “a great sign and it’s something that was needed,” said William Hudson, FAMU’s vice president of student affairs and enrollment management. “But what we’ve been able to do was just a one-time thing to assist students. For our future students and our current students, there still needs to be an investment, not just in aid, but also infrastructure so they’ll be able to actually attend and stay in college.”

Although these moves are a one-time deal, Wilberforce plans to “evaluate each semester independently” and make any decision that best assists its students, said William Woodson, the school’s senior vice president for finance and administration.

Public four-year HBCUs are more heavily dependent on federal and state legislatures for funding, which accounted for at least 50% of the schools’ overall revenue in 2015, according to a 2019 joint report from the American Council on Education and the United Negro College Fund. In contrast, 38% of overall revenue for predominately White institutions came from federal and state governments.

“What this action tells the president, and what it does for the federal discussion, is really underline one of the most important reasons that we need to cancel student debt—and that is to address the racial equity component,” Cody Hounanian, program director at Student Debt Crisis, said. “I hope this is a very important signal that HBCUs recognize that the student debt cancellation addresses the racial equity component, and the president should listen.” (Courtesy of Bloomberg Law)

To contact the reporter on this story: Ayanna Alexander in Washington at aalexander@bloomberglaw.com

To contact the editors responsible for this story: Andrew Childers at achilders@bloomberglaw.com; Meghashyam Mali at mmali@bloombergindustry.com