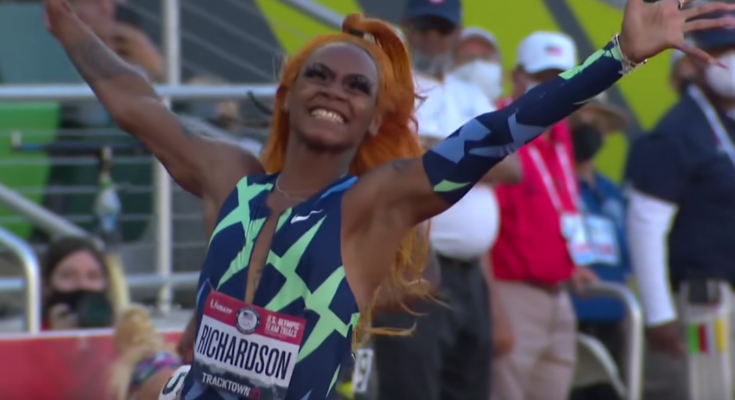 darudemagJul 02, 2021SportsComments Off on Sha’Carri Richardson suspended after testing positive for marijuana

Richardson, who won the 100 at Olympic trials in 10.86 seconds on June 19, told of her ban Friday on the “Today Show.” She tested positive at the Olympic trials and so her result is erased. Fourth-place finisher Jenna Prandini is expected to get Richardson’s spot in the 100.

Richardson accepted a 30-day suspension that ends July 27, which would be in time to run in the women’s relays. USA Track and Field has not disclosed plans for the relay.

The 21-year-old sprinter was expected to face Jamaica’s Shelly-Ann Fraser-Pryce in one of the most highly anticipated races of the Olympic track meet.

On Thursday, as reports swirled about her possible marijuana use, Richardson put out a tweet that said, simply: “I am human.” On Friday, she went on TV and said she smoked marijuana as a way of coping with her mother’s recent death.

“I was definitely triggered and blinded by emotions, blinded by badness, and hurting, and hiding hurt,” she said on “Today.” “I know I can’t hide myself, so in some type of way, I was trying to hide my pain.”

Richardson had what could have been a three-month sanction reduced to one month because she participated in a counseling program.

After the London Olympics, international regulators relaxed the threshold for what constitutes a positive test for marijuana from 15 nanograms per milliliter to 150 ng/m. They explained the new threshold was an attempt to ensure that in-competition use is detected and not use during the days and weeks before competition.

Though there have been wide-ranging debates about whether marijuana should be considered a performance-enhancing drug, the U.S. Anti-Doping Agency makes clear on its website that “all synthetic and naturally occurring cannabinoids are prohibited in-competition, except for cannabidiol (CBD),” a byproduct that is being explored for possible medical benefits.

While not weighing in on her prospects for the relays, USATF put out a statement that said her “situation is incredibly unfortunate and devastating for everyone involved.” The U.S. Olympic and Paralympic Committee said it was “working with USATF to determine the appropriate next steps.”

Richardson said if she’s allowed to run in the relay “I’m grateful, but if not, I’m just going to focus on myself.”

Her case is the latest in a number of doping-related embarrassments for U.S. track team. Among those banned for the Olympics are the reigning world champion at 100 meters, Christian Coleman, who is serving a suspension for missing tests, and the American record holder at 1,500 and 5,000 meters, Shelby Houlihan, who tested positive for a performance enhancer she blamed on tainted meat in a burrito. Also on Friday, defending Olympic 100-meter hurdles champion Brianna McNeal had a five-year ban for tampering or attempted tampering with the doping-control process upheld by the Court of Arbitration for Sport.

Now, Richardson is out as well, denying the Olympics of a much-hyped race and an electric personality. She ran at the trials with flowing orange hair and long fingernails.

“To put on a face and go out in front of the world and hide my pain, who am I to tell you how to cope when you’re dealing with pain and struggles you’ve never had to experience before?” Richardson said.

Previous PostIsrael continues to carry out a wave of Arrests of Palestinians Next PostSocial Media Reacts to Kodak Black Throwing $100,000.00 Into the Ocean and Toilet