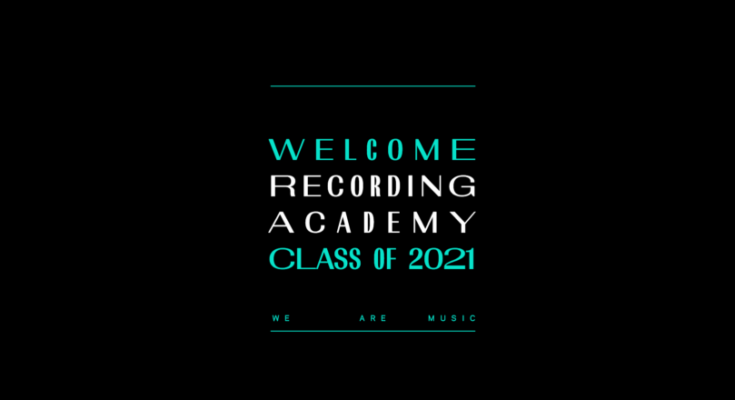 The Recording Academy is proud to announce its member class of 2021. As the world’s preeminent membership organization for performers, songwriters, producers and engineers, members work together to build a better and more inspiring world for music and its makers.

This class was selected by a committee of industry peers based on exceptional contributions to the music community.

The 2021 class of invitees is 48% female, 32% Black or African American+, 13% Hispanic or Latino/a/x+, and 4% Asian or Pacific Islander+. The Academy’s existing membership represents 26% female and 27% from traditionally underrepresented groups. Since setting the goal of adding 2,500 women voting members by 2025, 831 women have joined the Recording Academy’s voting membership, putting the organization 33% closer to reaching that milestone.

Learn more about the Recording Academy’s membership process and requirements as well as the new class of invitees.

“Membership is the Academy’s change agent — our members drive everything we do,” Ruby Marchand, Chief Industry Officer at the Recording Academy, said. “I’m inspired by the potential for each invited music creator and business professional to lend their creativity and passion to our organization. We are immensely proud of our accomplishments and the strides we’ve made toward equitable representation. We look forward to welcoming our new invitees as they help us shape the future of the Academy and the music industry.”

“This is an incredibly exciting time to join the Academy and play a part in accelerating change, progress and evolution within the music industry,” Kelley Purcell, Vice President of Membership and Industry Relations at the Recording Academy, said. “Our membership body is the driving force behind our actions, and we value the contributions of our members that help ensure the Academy’s practices authentically represent the current state of music. We’re excited to see what this new group brings to the table as we enter a new era at the Academy.”

Recording Academy membership reflects the rich, diverse and wide-ranging contributions of music creators and professionals. The areas of focus include service, advocacy, and recognition of the art and craft of music with a community-driven approach and peer reviews on an annual cycle. In order to participate in the process for the upcoming GRAMMY Awards, new members have to accept their invitations by Sept. 15, 2021. The first voting ballot opens Oct. 22 and closes Nov. 5. The 2022 GRAMMY Awards show, officially known as the 64th GRAMMY Awards, are set to take place Jan. 31, 2022, at the STAPLES Center in Los Angeles.