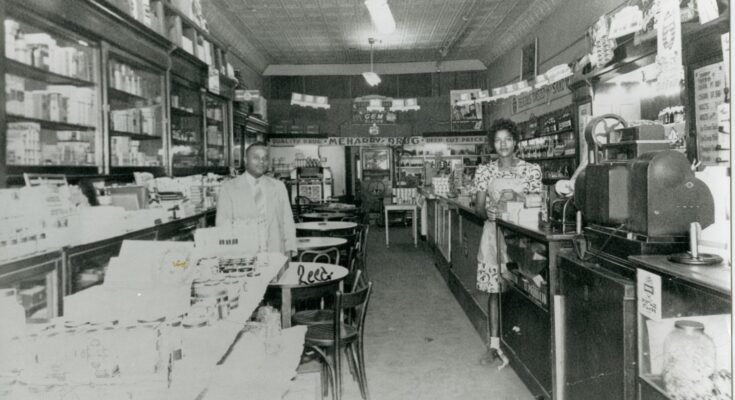 Before the Tulsa Race Massacre, the city’s African American district thrived as a community of business leaders and visionaries.

As more is learned about the Tulsa Race Massacre of 1921, including the discovery of mass graves, the stories of the African Americans who turned the city’s Greenwood district into “Black Wall Street” are equally as revealing. Before a white mob decimated 35 blocks of a thriving community, African Americans had migrated to Tulsa, pooling their resources and building wealth to create successful businesses amid Jim Crow discrimination.

Before the Greenwood district was established, African Americans came to Oklahoma in the mid-19th century as slaves of the Five Civilized Tribes, the term used for the Cherokee, Chickasaw, Choctaw, Creek and Seminole tribes, who were forced from their lands in the southeast part of the country, resettling in Oklahoma, then known as Indian Territory. After the Civil War, under the terms of the Treaties of 1866, these African Americans were emancipated with some integrating into the tribes, a relationship that would later provide freedmen with their own land.

“The relative wealth of some Black folks in Oklahoma comes in part through their connection to the tribes and their landownership,” says Hannibal Johnson, historian and author of Black Wall Street 100: An American City Grapples with Its Historical Racial Trauma. The Dawes Act of 1887 authorized the government to divide tribal territories into allotments for individual Native Americans, which included Black members. As word spread that Indian Territory was a safe place for African Americans to settle, between 1865 and 1920, more than 50 Black townships were founded in Oklahoma.

The Architects of Greenwood

A wealthy Black landowner named O.W. Gurley is commonly referred to as the founder of Greenwood. Born to freed slaves in Alabama, Gurley was raised in Arkansas, and moved to Oklahoma during the Oklahoma Land Rush of 1889. After running a general store in Perry, Oklahoma, Gurley, a serial entrepreneur, moved to oil-rich Tulsa, and reportedly purchased 40 acres of land on the north side of the city with the vision of selling residential and commercial plots to African Americans. Gurley wasted no time, opening a rooming house, purchasing buildings and providing loans to help other Black people start their own businesses.

And another entrepreneur shared Gurley’s dream of Greenwood becoming a self-reliant enclave for Black Tulsans.

J.B. Stradford, son of a former enslaved man, was a lawyer from Kentucky who owned pool halls, shoeshine parlors and boarding houses, before moving to Tulsa around 1899, with the goal of creating wealth in Indian Territory. Stradford invested in real estate properties and built the Stradford Hotel on Greenwood Avenue, a luxury establishment that was considered the largest Black-owned hotel in the country, with 54 guest suites, a pool hall, saloon and dining room.

African Americans fleeing racial oppression in the Deep South and those wanting to live in a city with more resources migrated to Tulsa’s Greenwood district.

A.J. Smitherman, whose family moved to Indian Territory in the 1890s, founded the Tulsa Star, a Black newspaper based in Greenwood. As the publisher, Smitherman was outspoken about discrimination and regularly informed African Americans about their legal rights and called for Black men, many in Tulsa who served in World War I, to take up arms, in response to white mob violence.

“He literally went to intervene in lynchings and other kinds of events throughout Oklahoma,” says Johnson. “He was an activist in every sense of the word.” And Greenwood residents looked out for each other and supported Black-owned businesses. In the district, there were luxury shops, restaurants, grocery stores, hotels, theaters, barbershops and salons, pool halls, nightclubs, funeral homes, and offices for doctors, lawyers and dentists. Greenwood also had its own schools, post office, bank, hospital and jitney service.

Education also drew Black families to Greenwood. In 1913, Booker T. Washington High School opened, hiring Ellis Walker Woods as its principal, a beloved educator who would serve in that role for 35 years. Woods, who was college-educated, walked from Memphis to Oklahoma after seeing a flyer advertising for Black teachers in Oklahoma.

Simon Berry, a pilot, responded to Tulsa’s whites-only taxi service by starting his own with a Model-T Ford, then expanding operations to include a bus line and later a charter plane service for wealthy oilmen.

John and Loula Williams became some of the wealthiest Black people in Tulsa. They owned the Dreamland Theatre on Greenwood Avenue, along with a rooming house, a confectionary, commercial rental property and a garage. Loula Williams was very much a partner in all the couple’s businesses, and other women in Greenwood became entrepreneurs too. Mabel Little, from Boley, Oklahoma, arrived in Tulsa in 1913 with $1.25 in her pocket. Little, who lived to be 104 and survived the massacre, opened a successful hair salon and worked in the beauty business for decades.

Although wealthy Black people lived in Greenwood, plenty still struggled, working menial jobs and living in shanties. But the money they spent in the district helped build the community.

“People working outside the district, particularly the domestics, the housekeepers, cooks, nannies or the ushers at the magnificent Art Deco theaters or bellhops at the great hotels would get paid and then return to Greenwood with their money,” says Michelle Place, executive director of the Tulsa Historical Society and Museum. “With segregation, they can’t spend their money anywhere else. They can make their money out of the district, but they can’t spend it there.”

On May 31, 1921, a white mob descended on Greenwood, destroying 1,000 homes and multiple businesses, displacing most of the district’s 10,000 residents. A reported 300 Black residents were killed.

Greenwood was rebuilt, with the help of B.C. Franklin, a lawyer from Rentiesville, Oklahoma, who moved to Greenwood a few months before the massacre. Franklin successfully challenged discriminatory ordinances meant to stop Greenwood residents from rebuilding after the massacre. (written by: Alexis Clark | courtesy of History)

READ MORE: How the Tulsa Race Massacre Was Covered Up