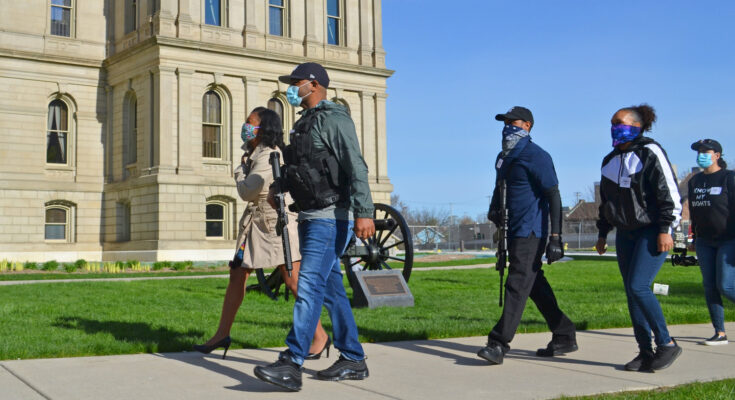 According to the Guardian, A black lawmaker came to Michigan’s capitol with an escort of armed black citizens on Wednesday, days after white protesters with guns staged a volatile protest inside the state house, comparing the Democratic governor’s public health orders to “tyranny”.

The state representative Sarah Anthony, 36, said she wanted to highlight what she saw as the failure of the Michigan capitol police to provide legislators with adequate security during the protest, which saw demonstrators with rifles standing in the legislative chamber above lawmakers.

“When traditional systems, whether it’s law enforcement or whatever, fail us, we also have the ability to take care of ourselves,” she told the Guardian. Anthony became the first African American woman elected to represent her district in Lansing, Michigan’s capital, in 2018.

As of today, Michigan has seen 45,054 COVID cases and 4,250 deaths. There’s real work to do and I’m here to work for the people…without intimidation or fear. https://t.co/7bc9Se53lc

One of Anthony’s constituents, a black firefighter, organized Wednesday’s capitol escort. While early reports focused on three black men with large rifles escorting Anthony, there were six participants, including two women, and some of them were armed with handguns, Lynn said. Five of the participants are black and one is Hispanic. Michael Lynn Jr, a Lansing resident, said he was frustrated to see his legislator being violently intimidated in her workplace. He said the escort was the first time he had ever chosen to openly carry his AR-15 rifle. 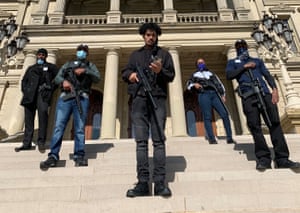 Lynn said he did not want to see a black woman who had been elevated to political office feeling threatened “because of the white supremacists in the yard” and wanted “to make sure that would never happen again”.

“Being a black and brown female Democrat in the capitol now is a dangerous job,” Lynn said. “This is an environment that Donald Trump has nurtured.”

Anthony described last week’s protest, which drew hundreds of people, as “one of the most unnerving feelings I’ve ever felt in my life”.

“If I don’t vote the way that these people want me to vote, are they going to rush the and start shooting us?” she said. “You could feel the floor rumbling. You could hear them yelling and screaming.”

Despite the armed escort, Anthony said she was “actively working to prohibit open carry” of firearms in the state capitol, which is currently legal.

Anthony said her goal was not to encourage more armed citizens to volunteer to protect lawmakers, but to ensure that the law enforcement officers paid by taxpayers to keep legislators safe would do a better job in the future.

Lynn, 38, is a gun rights advocate who has a permit to carry a concealed handgun in public, but he called the armed white protesters’ behavior “ridiculous” and “barbaric”.

“What they did and what they intended to do,” he said, was to “derail democracy”.

Lynn said he was frustrated after last week’s protests when he saw black Americans sharing comments that they would never be allowed to carry guns in the capitol and scream into the faces of police officers.

There was truth to those perspectives, he said; the response would have been different. But he also wanted to “change the narrative”.

“We can’t normalize that narrative to where it seems as if we’re supposed to be scared to exercise our second amendment rights as everyone else does,” he said.

Wednesday was a quiet work day at the capitol, and “the state troopers were very accommodating. Nobody acted as if we should not be there,” Lynn said.

Michigan’s state capitol has been the scene of several large protests demanding that the state’s Democratic governor, Gretchen Whitmer, reopen the economy.

While police at the capitol usually do an adequate job of protecting lawmakers, Anthony said, she felt law enforcement had simply left them to their own devices during last week’s protest.

A spokeswoman for Michigan’s state police said that they were “constantly reviewing” their practices and “adjusting protocols as needed”.

The state police hosted a call with legislators on 4 May to brief them on available security services, including security escorts, after “ learning that some representatives were fearful for their safety” during the protest, a spokeswoman, Shannon Banner, wrote in an e-mail.

Anthony said it had been meaningful to receive a personal offer from constituents to help ensure her safety. But, she said, “the thing that I hope does not happen with this photo is that this creates an environment that would feel like more guns are needed in order to protect ourselves.”

“The thing that keeps me up at night is the fear that we are becoming more polarized, more angry,” Anthony said. “My fear is real that we are creating an environment that is a powder keg, and I don’t want to see citizens of all stripes getting hurt.” (Courtesy of The Guardian |Photograph: Courtesy of Michael Lynn Jr. / Merica20tolife)

Previous PostMusic Executive Andre Harrell Dies at 59 Next PostGregory McMichael and Travis McMichael Were Arrested and Charged in Connection with the Killing of Mr. Arbery