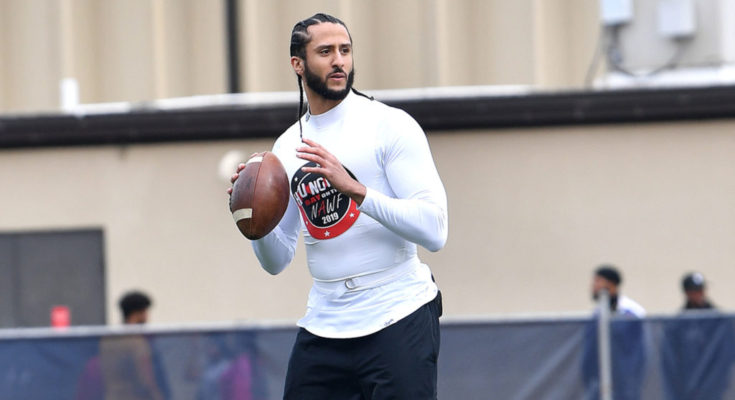 Carolina Panthers safety Eric Reid said “it feels disingenuous” that the NFL would schedule a workout for Colin Kaepernick on Saturday.

“I’ll believe it when I see it,” Reid said Wednesday. “At this point, it feels like a PR stunt.”

Kaepernick and Reid are former San Francisco 49ers teammates. In 2016, Reid was the first player to join Kaepernick in taking a knee during the pregame national anthem to protest social injustice. Kaepernick hasn’t played in the NFL since that season.

Coaches for the Miami Dolphins, Detroit Lions, Atlanta Falcons and Tampa Bay Buccaneers have said they expect to have a representative at the Falcons’ practice facility on Saturday for the workout. In addition, John Elway told 9News that the Denver Broncos will be represented, and a Washington Redskins spokesman said that organization would be there. The Dallas Cowboys and Arizona Cardinals also plan to be at the workout, sources told ESPN.

Reid reminded reporters that NFL head coaches and general managers typically are traveling or with their teams on Saturdays.

“What decision-makers are going to be able to attend a workout?” he asked. “The other strange thing, I saw there was a report other teams were interested in Colin but they reached out to the league about it. That’s strange.”

Reid said “strange” because most free agents or their agents are contacted directly by the team that is interested.

“They don’t call the league,” he said.

Reid has been one of Kaepernick’s strongest advocates since they began kneeling during the anthem. They both filed grievances against the league, alleging collusion for not signing them to an NFL contract because of their protests.

They both reached settlements in February. Reid signed a one-year deal with the Panthers in late September 2018, and during this past offseason signed a three-year deal worth up to $24 million.

He continues to kneel during the anthem.

Reid compared Kaepernick’s playing style to Baltimore’s Lamar Jackson, who is putting up MVP-like numbers with his passing and running this season. Even at 32, Kaepernick can help a team, Reid said.

“He has a rocket for an arm,” he said. “He’s tall [6-foot-4], so he can see over the pocket. And he’s mobile. He’s Lamar Jackson before Lamar Jackson. And he can still throw the ball.”

From putting in work predraft, to staying ready against the odds! Love to my Brother @obj – #StillReady 🎥: @relrelrelrel @djtonedef @garyngusc

But Reid remains skeptical of the NFL’s sincerity in scheduling the workout for Kaepernick.

“It’s disingenuous,” Reid said. “They want the appearance of giving Colin a chance, but they give him two hours’ notice and tell it has to be on a Saturday when they know decision-makers are traveling. So is this real? We’ll see.”

Reid said Kaepernick was told on Tuesday he had two to three hours to let the league know if he would attend the workout before the offer was released to the media.

Sources told ESPN that Kaepernick and his reps were alerted to the workout at 10 a.m. Tuesday, ahead of a 4 p.m. ET personnel notice that was sent to teams.

Sources told ESPN’s Dan Graziano that the workout was also set up in response to an Oct. 10 statement by Kaepernick’s representatives, who said they had received “little to no response” from the 32 NFL teams.

Carolina coach Ron Rivera deferred to general manager Marty Hurney when asked if the team would send a representative to the workout. Hurney did not immediately respond to messages.

Reid said he has been given no indication whether the Panthers would attend. He talked to owner David Tepper last week about giving Kaepernick a look after franchise quarterback Cam Newton (foot) was placed on injured reserve for the rest of the season.

“He communicated they weren’t looking to add a veteran quarterback, but if they were, they’d be interested,” Reid said. “So we’ll see if they send somebody to be there.”

Reid, who worked out with Kaepernick during the offseason, said the quarterback has been staying in shape with a trainer in New York City. He wasn’t sure who Kaepernick would throw to at Saturday’s workout.

Asked why the tryout is being held now, when 16 teams already have used backups this season, Reid replied: “Good question.”

“It’s interesting how that happens every year, how the quarterback storyline progressively gets worse in the sense more starters are out,” Reid said. “And yet, Colin has never gotten a chance.”

But Reid said it’s not too late for Kaepernick to make an impact in the NFL if this workout gets him that chance.

“He’s in the prime of his career,” Reid said. “He still has a cannon for an arm. He can still run. Too late for his career? No.” (Reprint Courtesy of David Newton)

Information from ESPN’s Ed Werder and Josh Weinfuss was used in this report.