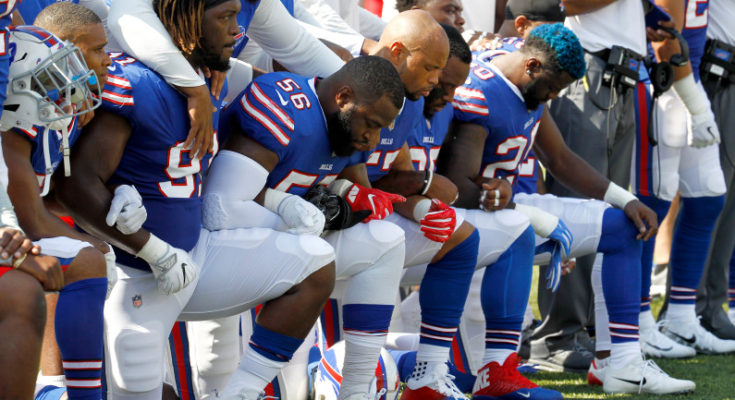 Again, NFL owners want players to agree to stand for the national anthem

The issue that has hung over the NFL since last fall, vexing league leaders and team owners as they sought a means to extricate the sport from a polarizing national debate, did not dissipate in May as the owners hoped when they ratified a new national anthem policy.

The enactment of that policy is now on hold as part of an agreement between the NFL and the NFL Players Association, buying time for the league to attempt to work out a mutually agreeable resolution with the players’ union before the start of the season. But those deliberations begin with the goal of the owners unchanged from May: According to multiple people familiar with the owners’ thinking, there remains strong sentiment among them that they want players to stand for the anthem, by agreement if possible rather than via a unilaterally imposed policy.

“Of course we want them to agree to stand,” a high-ranking official from one NFL team said.

That feeling among the owners was confirmed by others with knowledge of the league’s inner workings who called the sentiment perhaps not unanimous but certainly widespread within ownership. But if the owners plan to seek the players’ agreement to stand for the anthem before games, what is not known is what the rest of that conversation entails.

The high-ranking team official said he was “just not sure” how the deliberations with the players will proceed and added that he was “not sure how this will end up.”

The latest consternation over the anthem policy plays out as NFL teams report to training camps this week. The clock is ticking for the owners and those league leaders who have expressed a strong desire to put the focus of fans back on the NFL’s on-field product, contending that being in the middle of such a contentious issue is no way to run a prosperous business. The preseason is scheduled to begin Aug. 2. The regular season is to start Sept. 6.

Players enter the deliberations with a desire to revert to the anthem policy that was in place before the May change. That previous policy required players to be on the sideline for the anthem. It suggested but did not require that they stand. That allowed for the players’ protest movement begun in 2016. Quarterback Colin Kaepernick, then with the San Francisco 49ers, refused to stand for the anthem in protest of racial inequality and police treatment of African Americans.

“As players, we don’t want anything to change,” Buffalo Bills linebacker Lorenzo Alexander, a member of the players’ union’s ruling executive committee, said last week. “We want it the way it is now. But we don’t want to live in a world where everything depends on the views of that particular team’s owner.”

But Alexander also said the players would enter the discussions with the league with a willingness to listen.

“We need to go into this thing with an open mind, both sides, not so polarized,” he said. “We need to have clear heads and open hearts when we’re talking about these issues.”

The protests continued last season with Kaepernick out of the league, and President Donald Trump intensified the controversy last September when he said at a campaign rally that owners should fire any player who protests during the anthem. Trump has not relented, framing the issue as one of patriotism rather than of players bringing attention to what they consider social injustice.

The new policy approved in May amounted to an attempt by the league and the owners to make everyone happy, or at least happy enough. Players would be expected to stand for the anthem if they were on the sideline but were given the option of remaining in the locker room instead. The league would fine a team for any protest by one of its players but the decision about whether to discipline a player for a protest was left to the team involved.

The policy made few happy. The union filed a grievance and left open the possibility of taking legal action.

Meanwhile, Trump has kept coming back to the issue. After last week’s agreement between the league and union was announced, Trump expressed his disbelief while writing on Twitter that a player should be banned for one game for his first time kneeling during the anthem and banned for the season for a second instance.

“We recognize with our visibility and the interest itself, it’s taken a life of its own,” Jones said at the May owners’ meeting in Atlanta. “And so all of that, we have to measure. We get out and we ask the world: ‘Don’t turn your head. Look at us. Look over here. Look at the NFL. Look at everything we’re doing.’ And so when we’ve got some issues that we’ve got to work through, we’ve got to realize that we’ve asked you to look, now, let’s do as good as we can do.”

Owners considered other alternatives before the May resolution, including reverting to the sport’s pre-2009 approach of keeping all players in the locker rooms until after the anthem. If the discussions with the union fail to produce an agreement, the league and owners will have to decide whether to move ahead with the May policy or find a different solution.

The union points to previous assurances that it said were made by the league that players had the right to protest. But when the league crafted a social justice deal with the players last year, an agreement to provide funding for community activism, it dealt with the Players Coalition, a group led by Philadelphia Eagles safety Malcolm Jenkins and former NFL wide receiver Anquan Boldin. Goodell regularly spoke directly with Jenkins and Boldin.

Before the May resolution, some within the sport said Goodell was wary of doing anything that would undermine the trust he’d forged in his direct dealings with some players. But when the May policy was announced, Goodell joined owners in saying players were expected to stand if on the field for the anthem.

The league and union rarely have coexisted peacefully in recent memory. Owners locked out the players in the last set of labor negotiations and the two sides have clashed repeatedly in court over player disciplinary matters. The NFL has not been able to replicate the model on social issues employed by the NBA, whose history of labor strife has not stopped players from abiding by that league’s policy to stand for the anthem, despite players and coaches being outspoken on social issues and Trump.