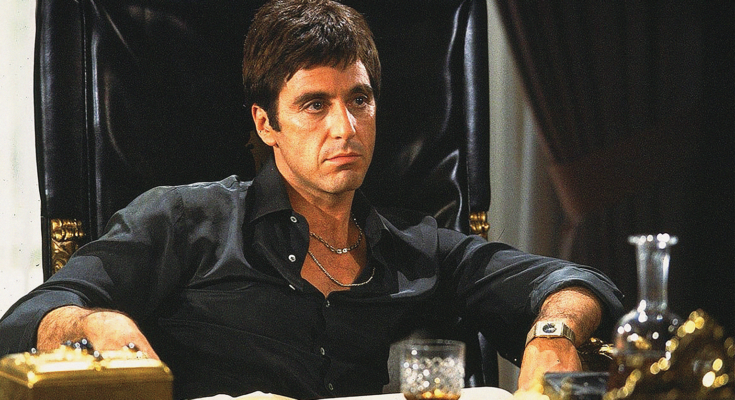 Brian De Palma’s “Scarface” has a rightfully earned reputation as a blood-fest, but the reviews it received upon release in 1983 were almost as gory. “An overblown B-movie,” was New York Magazine’s assessment of De Palma’s ultra-violent depiction of Cuban immigrant Tony Montana (played by Al Pacino) and his rise through the drug world. The Post’s headline at the time simply called it a “pointless bloodbath.”
Thirty-five years later, the movie is lauded as a classic, and it’s being given a special anniversary screening Thursday at the Beacon Theatre, as part of the Tribeca Film Festival. But as Steven Bauer (who played Montana’s sidekick, Manny Ribera) tells The Post, it was hip-hop culture that did the most to restore it to prominence.
“‘Scarface’ was dead and buried until hip-hop rediscovered it,” says the 61-year-old actor. “In the early ’90s, I would start getting recognized on the street by rappers. They would say, ‘Oh, I gotta give you respect — that’s THE movie.’ I didn’t know all of them, so I would have to ask someone, ‘Who was that?’ ”
A major part of the appeal was Montana’s determination to climb out of poverty and street life to achieve success and extreme wealth — an origin story mirrored frequently in hip-hop. “We were just happy to see another cat that had nothing, making it … no matter how he was getting it,” said P. Diddy in the 2003 documentary, “Scarface: Origins of a Hip-Hop Classic.”
The movie’s dialogue has been sampled and reproduced dozens of times: There’s a reference to “Scarface”​ dialogue​ in the new Nicki Minaj track “Chun-Li,” which just came out Thursday. And earlier this week, Queens rapper Rich the Kid hit No. 2 on the Billboard 200 album chart with his debut, “The World Is Yours” — a phrase lifted from the flick. During the era of “MTV Cribs,” it was a cliché to see rappers such as Lil Wayne and Big Boi showing off their memorabilia, and one member of the Houston gangsta​-​rap crew the Geto Boys identified with the lead character so much, he called himself “Scarface.”
Here, Bauer explains how figures in hip-hop and the wider world of pop culture have expressed their love of the movie.
Jay-Z has famously sampled and referenced “Scarface” multiple times over his career — have you come across him?
Yes, at Shaquille O’Neal’s birthday party [in 2006]. He went out of his way to say it was a very big thing in his life. Shaq’s people called me once and said he was having a “Scarface”-themed party, and that he would be so happy if I came dressed as myself. He had a mock-up of Gina’s salon made especially for the party, and they had a sandwich stand set up just like me and Al [Pacino] work in at the start of the film. Shaq was even wearing a white suit — just like Tony!

Rappers often talk about identifying with Tony Montana, but has anyone ever said they identified with your character?

Definitely. In 2007, I finally got a role on “Law and Order: Special Victims Unit,” which I always wanted to do. I get to the set one morning, and I see Ice T [who plays the main role of Fin Tutuola]. I introduce myself: “Hi T, I’m Steven Bauer, I’m gonna be working with you.” He says “OK,” and kind of brushes me off. When we come to do the scene, he suddenly goes, “Wait, stop, I know you!” And then he turned to the crew and says, “How come no one told me he was on the set? Five-minute — no, make it a 10-minute — break!” He stopped shooting so he could ask me all the “Scarface” questions, but he also started telling me about how he related to my character growing up. “I never carried a gun, but I looked like you,” he said. “I had the good clothes, I was into the women, and the good life! So when I saw you, I saw me!”

What non-rap artists have you come across who love “Scarface”?

I just did a video with Zayn Malik [for “Let Me”], which is obviously inspired by the movie. He was so excited to meet me and we got into some conversations about the movie. Zayn said that “Scarface” really influenced his life — before music even did. He said he had all the posters in his room in Bradford, England, and he knows the dialogue. He also has a globe that says, “The World is Yours,” in his house in LA. He had it ordered to be exactly like the one Tony has in his fountain in the movie! I haven’t seen it yet, but I’m gonna go over to his house to see it soon. We’re almost like best buddies now! (By Hardeep Phull)
Previous PostReview: Beyoncé Is Bigger Than Coachella! Next Post'Invasion of Privacy' Confirms Cadi B's Authentic Hip Hop Skills