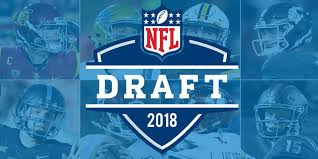 The 2018 NFL Draft is almost here so it’s time to take a closer look at the latest NFL mock drafts. Look for first-round predictions, the draft’s top players, and the first-round draft order below.

This draft figures to be quarterback heavy, with potentially four signal callers going in the top 10. Of the non-quarterbacks, Penn State’s Saquon Barkley and Alabama’s Minkah Fitzpatrick could be selected in the top 5.