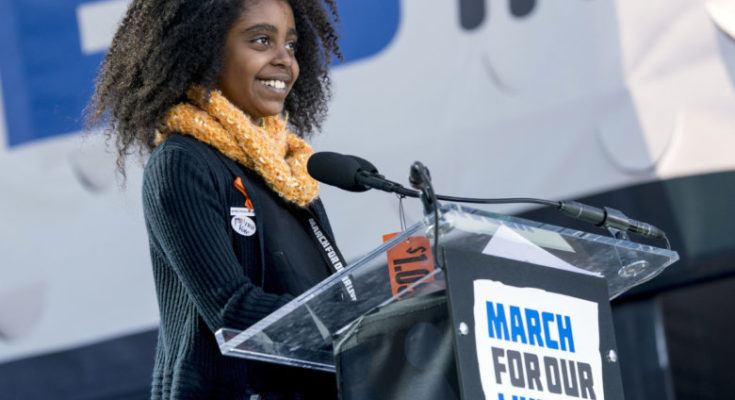 Black women and girls are often the victims of gun violence.

When tens of thousands of Americans took to the streets on Saturday to demand more gun control in the wake of a high-profile school shooting last month, several young black women were at the front of the protests.

In addition to calling for stricter gun control policy, they had a more nuanced message to deliver: America has failed to focus on black victims, especially black women and girls, who are disproportionately affected by gun violence.

“I am here to acknowledge and represent the African American girls whose stories don’t make the front page of every national newspaper, whose stories don’t lead on the evening news,” said 11-year old Naomi Wadler during a speech at Washington’s March for our Lives.

Wadler, who helped organize a walkout at her elementary school earlier this month, spoke of black girls like 17-year-old Courtlin Arrington, who was fatally shot in her Birmingham, Alabama, high school classroom in early March; Hadiya Pendleton, a 15-year-old shot and killed in Chicago days after performing in President Obama’s second inauguration; and Taiyania Thompson, a 16-year-old shot and killed in a Washington, DC, apartment earlier this year.

“For far too long, these names, these black girls and women, have been just numbers,” Wadler added. “I’m here to say ‘never again’ for those girls too.”

In the weeks since the February 14 Parkland school shooting, student survivors have dominated the national stage with their calls for gun control. Their activism has not been without its detractors, but it has also drawn considerable support from celebrities and the media.

For communities of color who have been afflicted by gun violence for decades, and who feel that their concerns have been largely ignored by politicians and the media, this difference has been jarring.

Parkland student Aalayah Eastmond, who was in a classroom studying the Holocaust when a gunman began firing at students last month, also used the Saturday protest to call attention to how black victims of gun violence are ignored. “I’m here to speak for the urban communities that have been speaking out about this way before February 14, 2018,” Eastmond said. “Their voices are just as important as ours, and they need to be heard.”

Black communities are disproportionately affected by gun violence. In 2016, the FBI noted that black people accounted for 52 percent of murder victims. Nearly three-quarters of murders that year were committed with guns.

Most discussions of race and gun violence focus on black men, who are particularly likely to be exposed to gun violence. But that violence should not obscure the fact that black women are also at risk.

According to the Violence Policy Center, black women experience the highest rates of gun homicide out of any group of women, and much of that can be attributed to instances of intimate partner violence. “Compared to a black male, a black female is far more likely to be killed by her spouse, an intimate acquaintance, or a family member than by a stranger,” the group noted in a 2016 report.

The rate of gun homicide deaths for black women exceeds that of white men. A 2017 report from the Centers for Disease Control and Prevention said that black women were the group most likely to experience fatal homicides.

Black women are also often the victims of police violence. The deaths of black women in police shootings spurred the creation of the #SayHerName movement in 2015. And a recent study from researchers at Washington University in St. Louis looking at police shootings from May 2013 to January 2015 found that nearly 60 percent of black women killed by police were unarmed.

Black children are disproportionately targeted by gun violence as well. According to an analysis of fatal and nonfatal childhood firearm injuries compiled by the CDC, black children face the highest rates of firearm mortality, a difference largely driven by black youth being more likely to be fatally shot by someone else.

To their credit, Parkland students have been trying to face these issues head on. They met with the survivors of the 2016 Pulse nightclub shooting in Orlando, Florida, students from Chicago, and students of color in DC to ensure that the fight against gun violence is an inclusive one.

And by connecting with activists like Nza-Ari Khepra of Chicago’s anti-gun violence Project Orange Tree, Parkland students are making sure that women and girls of color, particularly black women who have been fighting for gun control for years, have a voice in the current movement.

This effort was on full display Saturday as a number of black and Latino youth, including 9-year-old Yolanda Renee King, granddaughter of Martin Luther King Jr., and 16-year old Chicago native Mya Middleton, took to the stage.

For students of color from Parkland, who have often been overlooked in media coverage, making these connections is absolutely crucial. “Yes, I am a Parkland survivor … but before this, I was a regular black girl,” Eastmond said at the March for Our Lives protest on Saturday. “I will fight for all of us.” (Courtesy of  P. R. Lockhart | Vox)