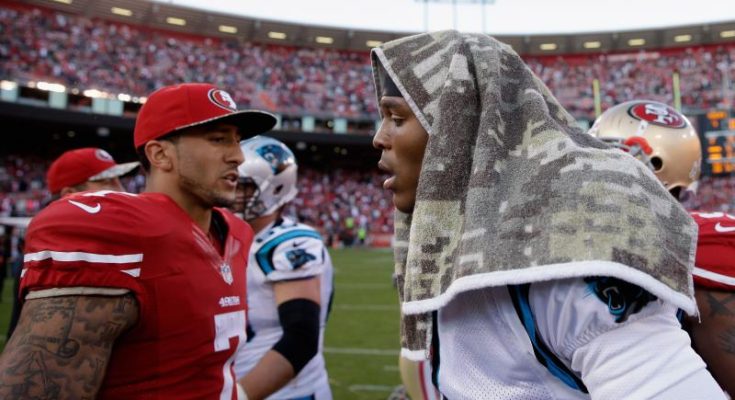 Newton said team captains have met with Panthers owner Jerry Richardson to discuss social issues but haven’t decided how to move forward with possible protests. Regardless, he wants people to remember the “ultimate sacrifice” made by Kaepernick.

“My hat goes off to the Colin Kaepernicks of the world,” Newton told reporters. “He’s made the ultimate sacrifice (as a player) and I respect that wholeheartedly. I can’t let a moment go by without shedding light to that: A person that does have the talent to play, a person that should be in this league, but I feel as if he’s not getting his just due because of his views.

“But that’s a legend, right there. For him to think outside of himself, to raise awareness of something that, this is 365 days removed from his first initial stand, and now here we are doing the same things. And now everybody is kind of understanding what his reasoning was, and I respect that.”

Kaepernick started a movement of dropping to a knee during the national anthem in the 2016 NFL preseason. Athletes from across the sports spectrum later joined him. He explained the decision to Steve Wyche of NFL.com last August as the issue began to attract national attention.

“I am not going to stand up to show pride in a flag for a country that oppresses black people and people of color,” he said. “To me, this is bigger than football and it would be selfish on my part to look the other way. There are bodies in the street and people getting paid leave and getting away with murder.”

The 29-year-old Wisconsin native, who’s of mixed-race heritage, opted out of his contract with the Niners in March and hasn’t been signed by another NFL team.

Several fellow players, including outspoken Seattle Seahawks cornerback Richard Sherman, have said they believe Kaepernick is being “blackballed” for taking a public stand.

“I’m sure he is,” Sherman said on ESPN’s First Take in March. “It’s difficult to see because he’s played at such a high level, and you see guys, quarterbacks, who have never played at a high level being signed by teams. So it’s difficult to understand. Obviously he’s going to be in a backup role at this point. But you see quarterbacks, there was a year Matt Schaub had a pretty rough year and got signed the next year. So it has nothing to do with football. You can see that. They signed guys who have had off years before.” (Tim Daniels / BR | Image by Ezra Shaw / Getty Images)

Previous PostCelebrities Are Sending Help to Puerto Rico Next PostLeader of The Sexual Revolution, Hugh Hefner, Dies at 91