Home A Lifestyle Why Bywater Is New Orleans’ Hottest Neighborhood 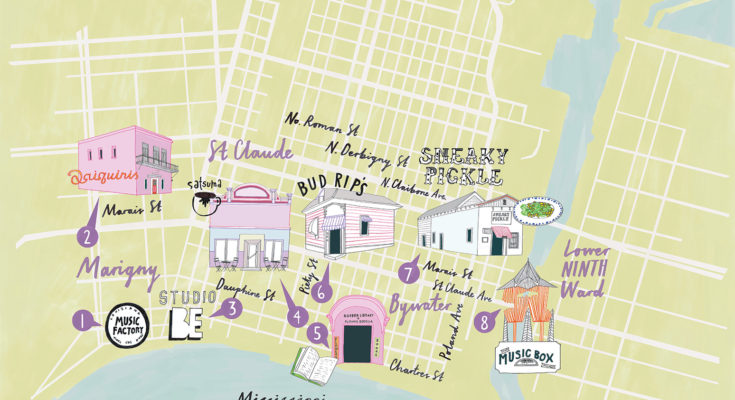 darudemagJun 28, 2017A Lifestyle, Business, Entertainment, MoneyComments Off on Why Bywater Is New Orleans’ Hottest Neighborhood

Just a 10-minute ride east along the Mississippi River, away from New Orleans’ boozy Bourbon Street and beignet-filled French Quarter, the Bywater is in full bloom. The neighborhood du jour, which has drawn comparisons to Brooklyn’s Bushwick, is part of a citywide post-Hurricane Katrina renaissance, which has welcomed an influx of musician transplants to New Orleans, from Solange, Alex Ebert of Edward Sharpe & The Magnetic Zeros and Arcade Fire’s Win Butler and Regine Chassagne, to Rickie Lee Jones, Ani DiFranco and The Pogues’ Spider Stacy.

For natives like Maroon 5 keyboardist and soul/R&B singer PJ Morton, who returned home in 2015 to launch Morton Records — a label he hopes will become the “New Orleans’ Motown” — the renaissance has been welcomed. “From NOCCA, the music school, being there to the street art everywhere you turn, The Bywater just gives you the feeling of being in an area where creative freedom is celebrated,” he tells Billboard.

“It’s fuckin’ Williamsburg South, man,” adds DiFranco with a laugh. The artist-activist, who witnessed the tail end of pre-Katrina NOLA, acknowledges both sides of the gentrification. “It’s great that the economy is really taking off, and it’s amazing to see houses getting fixed instead of slipping back into the swamp, but something is always lost when something is gained.” Recalling the city’s former landscape, which she describes as “bombs going off — just poverty,” she recognizes that the music kept playing through it all. “Like the fucking Titanic, it doesn’t stop in New Orleans and it never will, the soul is too deep.”

As for Jones, a longtime resident who used to have a loft in the French Quarter in the ‘80s and now lives in mid city, the city’s unique charm has kept her local. “You have to love the wet smell, decaying wood, old ghosts. If you like all that you will love this place,” she says. “The lesson is about letting go. The city controls the dials, not you. Floods, lightning, non stop thunder, sudden violence, this is true, but the lovely neighbors, friendly strangers, and traditions of the south, they make life here worth living.”

Ahead of the annual Essence Festival (June 30-July 8), Billboard takes a tour of the trendy new locales in and around the Big Easy milieu.

Spend hours poring over the stacks at Trombone Shorty’s go-to for “real, legit” Louisiana music, which includes a wall of high-end collectible vinyl, and pop-up shows. Shorty’s recent set spilled out into “a party in the street” and even saw a surprise guest Cyril Neville, who was just “walking by,” join in on the performance. The store is also a favorite of local heroes’ Tank & The Bangas, whose lead singer Tarriona “Tank” Ball always wanted to be one of the groups that did an in-store performance. “Call me crazy but it seems like one of the most intimate things to do with your fans,” she says.

Solange has turned Beyoncé, JAY-Z and Grizzly Bear’s Ed Droste into fans of Gene’s 32 oz., to-go Styrofoam slushes ($8), with Droste opting for the “WTF” — the bar’s five strongest concoctions mixed together. The 24-hour institution’s offerings also include creatively named potent blends, from the A.T.M. (Addicted To Money) to the Booty Call. Pro tip: Get an extra shot for just $1. If you’re left feeling hangry, chase it with one of their famed po’ boys — from roast beef and hot sausage ($9) to shrimp and catfish ($10.95).

“It’s my generation’s voice,” says Morton of this 35,000-square-foot studio, founded in 2016 by Brandan “B-Mike” Odums, a visual artist whose Black Lives Matter paintings were featured in Ava DuVernay’s Queen Sugar drama series last year. “Seeing those pieces from a young black artist is just moving. There is a lot of art in New Orleans of course, most of it focusing on our history and the past in general. And while Studio BE certainly shines a light on our history, it puts it in the words and emotions of now.” B-Mike is also a former NOCCA classmate of Shorty, who describes the space as a “reclaimed warehouse,” with Tank — also a fan — dubbing it “one of the most magical places in the city.”

Stay healthy and caffeinated at this funky, all-organic coffee house/juice bar hybrid. Past patrons include David Byrne and Shorty, who prefers the house chai ($3) and fresh-squeezed lemonade ($4.50). “I like their citrus and fruit juices, so I pop by here and grab it fresh to go,” Shorty says, also calling out their killer breakfast sandwiches, which are served on homemade biscuits ($5) and are “all organic.”

On Ebert’s “favorite corner” of Dauphine and Piety, this combo store is a “brand new place you’d think was there forever,” that includes a florist downstairs, a used/rare books upstairs, and perks like free coffee, a large communal table to read or work, and “jungle noises.”

The storied dive bar, opened in 1860 and now co-owned by The Afghan Whigs’ Greg Dulli, is a regular stop for Ebert and Stacy, who describes it as “once a haunt of wharf rats and longshoremen,” and says it is best experienced “when the edibles are kicking in and the abandoned howl of [local band] Pilette’s Ghost is echoing off the high, tin-tiled ceiling.” A revamp in 2014 added weekly crawfish boils and free oyster nights, but as Stacy bemoans, “it should definitely have been given a pass from the smoking ban.”

With a menu that changes every day, this vegan-friendly lunch spot is “vibrating in the spirit of the Bywater,” says Ebert, who compares it to the punk-rock dives of Los Angeles’ Echo Park. Opt for a homemade flatbread ($5.50) or the locally sourced pickle plate ($5), as part of their philosophy is to bring #goodfood to the nabe, servicing local farmers including Veggi Farmer’s Cooperative, Covey Rise, Nightshare Acres, and more.

This sound lab doubles as a mystical music venue with a treehouse stage setup, whose environment itself is made musical, thanks to “structures that make sound when interacted with,” describes Ebert, who calls it his “favorite venue in New Orleans.” The space has hosted performances by Wilco and Tank & The Bangas, the latter recently bringing out Norah Jones as a surprise guest (on a purple piano) during their “Alice Lost” concept set. “A purple piano and Norah Jones,” Tank recalls. “The Music Box encouraged, and challenged my artistry to go places it’s never been.” Adds Stacy: “It’s a dream-soaked many-layered, scrap and junkyard assemblage of salvage and sound. Very New Orleans, very out there.”

Escape New Orleans’ scorching temperatures at the covert Drifter Hotel, a recently renovated two-story boutique hotel that had its soft opening in May. Featuring an outdoor bar, the watering hole offers DJ sets and live performances with a $10 admission fee. Big Freedia, a bounce music star and Big Easy hero, calls the Drifter an “LGBT/hipster enclave” and cites its “clothing optional“ mandate as a main attraction. (Courtesy of Billboard, Editing & Addt’l Graphics by Loren Fouroux)

Previous PostHow to get a mortgage without a full-time, permanent job Next PostMigos, Chris Brown Fight New Video Shows Future & Khaled Got Sucked in Too