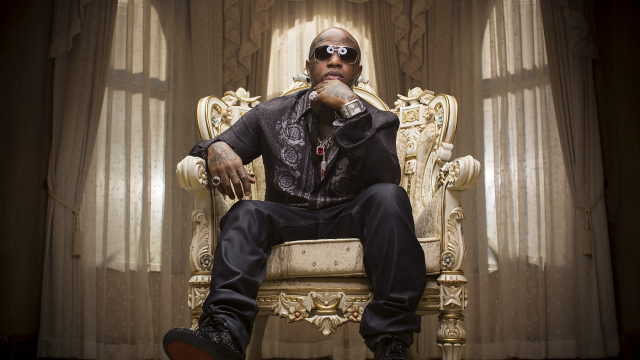 Rick Ross’ ninth studio album, Rather You Than Me, was released today (March 17) via Epic Records with high-profile collaborations with Nas, Jeezy, Future, Gucci Mane and Young Thug, among others. But it’s a solo Ross track (albeit with a Chris Rock introduction) that has the internet abuzz: “Idols Become Rivals,” which leaked online yesterday, features Ross spending three full verses and an extended outro taking aim at Cash Money Records CEO — and frequent Ross collaborator, at least in the past — Bryan “Birdman” Williams.

Among several claims, Ross hones in on one grievance that has cropped up repeatedly throughout Cash Money’s extensive history: that the label doesn’t pay artists and producers the full amount of royalties that they’re owed. “Catholic record labels, n—as gettin’ raped, boy /Birdman’s a priest, moans in his synagogue /Publishing is his sin, repent, forgive me, Lord,” he raps at one point; “You stole them boys’ pub and bought a foreclosure,” he raps at another, referring to the Hot Boys; “You would give us self-esteem and motivate our drive / But was in our pockets by the time we count to five,” he says still later.

His closing lines reference recent lawsuits with Lil Wayne and several Cash Money producers with, “I pray you find the kindness in your heart for Wayne/ His entire life, he gave you what there was to gain / I watched this whole debacle, so I’m part to blame/ Last request, can all producers please get paid?”

Since Cash Money was founded in the 1990s, several artists, producers and companies have either sued the label or publicly denounced its business practices, including Wayne, Juvenile, David Banner, Turk, producer DVLP, label EMI, Orange Factory Music and Drake’s first label Aspire Music Group. A few hours after the song leaked, Billboard spoke to Birdman in an unrelated interview and asked the Cash Money CEO about the allegations of missing payments over the years, and the Ross track that resurfaced them.

Last month, Ross spoke about his then-forthcoming album in an exclusive interview with Billboard and referenced “Idols Become Rivals” specifically. “It’s basically me writing a letter to someone in the game that I looked up to damn near the most and I hate what things have come to,” Rozay said at the time, not revealing the specific target. The song, however, erases any potential doubts.

Following the leak yesterday, Ross took to Instagram with a photo of Wayne and a caption explaining his reasoning for writing the song. “The Level of respect and Love that I have for WAYNE makes it hard to sit back and not speak on the situation,” he wrote. “Being a Boss means having the courage to say the things everybody thinking but scared to say.”

Wayne responded with a tweet of his own: “dam big bro that msg hit me in the heart and put the motivation on automatik start. I needed that. 1 boss 2 another.”
Ross and Birdman have collaborated several times in the past, even releasing a joint mixtape, The H: The Lost Album Vol. 1 together back in 2013. But things soured after Wayne and Birdman’s public falling out over the delay of Wayne’s Carter V album — which has still not been released, though Birdman is adamant it will arrive this year — and subsequent lawsuits against the label. -Courtesy of Billboard

Previous PostForbes 2017 Billionaires List: Meet The Richest People On The Planet Next PostReview: On Drake’s ‘More Life,’ the Creator Meets the Curator